Is Ocean Desalination a Sustainable Solution for Meeting the Potable Needs of the US & The World? 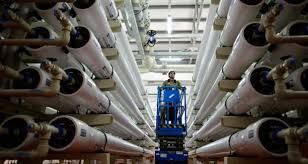 If you want to know why ocean desalination is a sustainable way to meet potable water needs around the world, let’s break this question down into its basic components:

We’ll answer each of these first and then we will aggregate everything together at the end to determine our answer.

What is ocean desalination?

Ocean desalination is the process of converting salt water into fresh water. This is achieved in a series of steps designed to separate the water and salt molecules. Usually, this is done with the goal of providing drinking water or process water for industry.

There are two main methods used to make seawater potable. One is by turning the water into steam. Essentially it’s a distillation process since water is the only component that changes state at a particular temperature, rising and leaving the remaining salts and minerals behind. Producing the steam can be done in several ways and each has its own advantages and disadvantages.

The other method is a membrane filtration process known as reverse osmosis. In equal pressure conditions, water naturally flows to whichever side of a water permeable membrane has a higher concentration of non-water molecules, like salt, to create an equilibrium of salt concentration. To force water into an area of lower salt concentration, a pressure differential must be introduced. Water would be more drawn to the side with lower pressure, leaving the salt behind.

What constitutes a sustainable solution?

Sustainability, is a balancing act between economics and ecology. It’s about managing resources in a manner that makes it possible to meet human needs while also considering environmental effects, energy use, and costs.

With the goal of sustainability, we create and improve upon technology. We aim to create products that are more energy efficient, lower cost, and with minimized environmental effects, all while producing more at faster rates.

Why are we concerned with potable water needs?

Obviously, humans need water to survive. The issue for concern is a lack of, or dwindling freshwater sources. Arid climates yield little to no fresh surface water and large populations can put stress on existing resources.

To further exacerbate the problem, pollution of surface and groundwater makes even the largest sources of freshwater non potable. Fresh water is not only used for drinking. Irrigation and industrial production use tremendous amounts of water as well, further depleting potential potable water sources.

Therefore, it becomes increasingly imperative that we manage our water sources. In addition, to finding new water sources in order to stave off any disputes about how water is to be distributed among people and businesses.

Where in the world does this apply?

Unfortunately, there are lots of places all over the world.

The far north and south of Africa, border oceans but do not have many bodies of surface fresh water. Central Africa has more sources, but poor government management and lack of funding make it very difficult for people to access it.

The high population densities and lax regulations of many East Asian countries have left rivers, lakes, and bays loaded with garbage, human waste, and chemicals.

Island nations across the world, most of Central America, Peru and Bolivia in South America suffer from a deficit of government aid for proper access. The arid climates of Mexico and the southwest United States are also hard on their respective populations.

The remainder of the world, sees either adequate amounts of annual rainfall, are blessed with multiple large bodies of freshwater or have rich governments who distribute potable water to their citizens.

Some countries even have all three. Those are some of the richest countries in the world. Perhaps there is a relation between a countries wealth and its abundance of water. After all, the world’s first civilization was nestled between two rivers.

The effects of ocean desalination process on the environment are mainly dependent on the design and implementation of the system.

There is concern regarding intakes and brine discharge and how they impact marine ecosystems, but these concerns can be minimized with a considerate design. For more information, view our post about the environmental implications of ocean desalination.

Distillation systems use a combination of thermal energy and electrical power, while RO only uses electrical energy.

Both can be designed to optimize power consumption through energy recycling, namely heat or pressure respectively.

Depending on where the system is being used, costs can vary. However, thermal desalination process typically have higher associated capital and operating costs. The most variation is seen in construction and energy costs.

Reverse osmosis systems are more compact and modular in design, therefore, construction costs for those are typically lower. Energy costs can be reduced further by using alternative energy sources like solar or a solid waste to energy system.

Ocean desalination systems have the potential to provide a virtually endless supply of clean drinking water all over the world in a sustainable manner.

These systems can be implemented at a relatively low cost with reduced energy input and little to no environmental harm when designed by people who are sustainably minded using advanced technology and an innovative process design.

Are you a coastal municipality, island nation or business in need of a new sustainable source of drinking water?

Contact the ocean desalination RO experts at Genesis Water Technologies, Inc. at 1-877-267-3699 or reach out to us via email at customersupport@genesiswatertech.com to arrange for a free initial consultation to discuss your application.

Previous Post: « What are the Environmental Implications of a Sea water Treatment Plant?
Next Post: What Makes GWT’s Seawater Reverse Osmosis Plant Different from Others? »