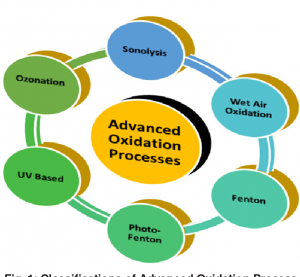 Advanced Oxidation is a rather complex wastewater treatment process. The general concept of how the process works can be difficult to grasp at first, and the number of possible oxidation methods can seem daunting. Therefore, you turn to the internet for information, and try to analyze together all the information you find using various online resources. However, everything doesn’t always fit right, and you come up with ideas that may not be quite true.

If you happen to have any misconceptions, perhaps one of them will be discussed below. If it is not, check out the contact information at the end of this article to discuss this process with a well-informed expert.

Advanced oxidation is an oxidation process that centers around the creation of the very powerful hydroxyl radical (•OH). These highly reactive oxidization molecules are created from the degredation of certain compounds that also double as secondary oxidizers.

There are three oxidants in particular that are very effective: ozone, hydrogen peroxide, and ultraviolet light. They are used in various combinations with one another — ozone can also be used by itself — to produce the •OH molecule.

Ozone degrades in a complex process when exposed to high concentrations of hydroxide ions or hydrogen peroxide. A UV light can be used as a catalyst to break down ozone and hydrogen peroxide by using massless photons to break atomic bonds.

The light can also aid in adding an element of disinfection to the AOP system as well as oxidation.

Once the radicals are produced, they break the pollutant compounds into intermediates which are further broken down by the remaining radicals and original oxidants. In the end, the contaminants are mostly broken down into simple inorganic compounds like water, carbon dioxide, and salts.

AOP systems are mostly used in tertiary treatments, as they are sensitive to suspended solids and other compounds (known as hydroxyl scavengers). These scavengers reduce the oxidation efficiency by blocking UV radiation and reacting with the •OH radical over the target compounds.

Now that we’ve briefly reviewed the basics of AOP process, let’s move on to four misconceptions of this particular process.

Though not impossible to modify a UV disinfection system into an AOP, it’s a bit more complex than just adding on a H2O2 tank. The two processes work very differently and the system designs are also quite dissimilar. H2O2 does have a rather low adsorption coefficient for UV, so high doses of peroxide need to be added and UV dosage may also need to be higher. Plus, peroxide dosing needs to be carefully done to avoid residual peroxide. If there is any, it would need to be removed before use or discharge, which could require an entirely different treatment.

As mentioned in the recap, advanced oxidation systems are defined for their production of hydroxyl radicals (OH radical) in sufficient quantities for effective treatment. An ozone system that is not specifically designed to maximize degradation into ⦁OH cannot be considered advanced oxidation. Ozone in and of itself is an oxidant. However, it is not as powerful as ⦁OH radical and its reaction times are significantly slower. The ways that an ozone system are modified into AOP advanced oxidation, are typical by way of the introduction of ozone into an alkaline pH feed solution. Thereby increasing the concentration of OH–, or by using UV or hydrogen peroxide to encourage •OH production.

Some complex treatment processes can require large areas to accommodate the necessary equipment, but AOP does not. It can also be quite easily scaled down for drinking water applications in smaller communities. Some systems can be small enough for flow rates as low as 25 gallons (100 liters) per minute or lower.

One of the costs most associated with wastewater treatment processes is the disposal of removed solids and other concentrated wastes. Advanced oxidation (AOP), however, doesn’t produce concentrated wastes. As it is, AOP effectively degrades more complex compounds into simple, harmless, more biodegradable compounds.

Hopefully, this helps clear some things up for you regarding this process. Advanced oxidation (AOP) is a complicated process, so it’s very possible to misunderstand aspects of its operation and applications. It is however, a very useful and effective wastewater treatment solution when designed properly. Depending upon the contamination level, the operating costs can be relatively high. However, it’s certainly a technology to be taken into consideration for the appropriate applications.

Do you have any other questions about the Advanced Oxidation Process (AOP) that require clarification? Call Genesis Water Technologies, Inc. at 1-877-267-3699 or email us at customersupport@genesiswatertech.com to speak with one of our experts.

Previous Post: « Pros and Cons of the Advanced Oxidation Process
Next Post: What is the Best KPI to Evaluate the Efficiency of Your AOP System? »