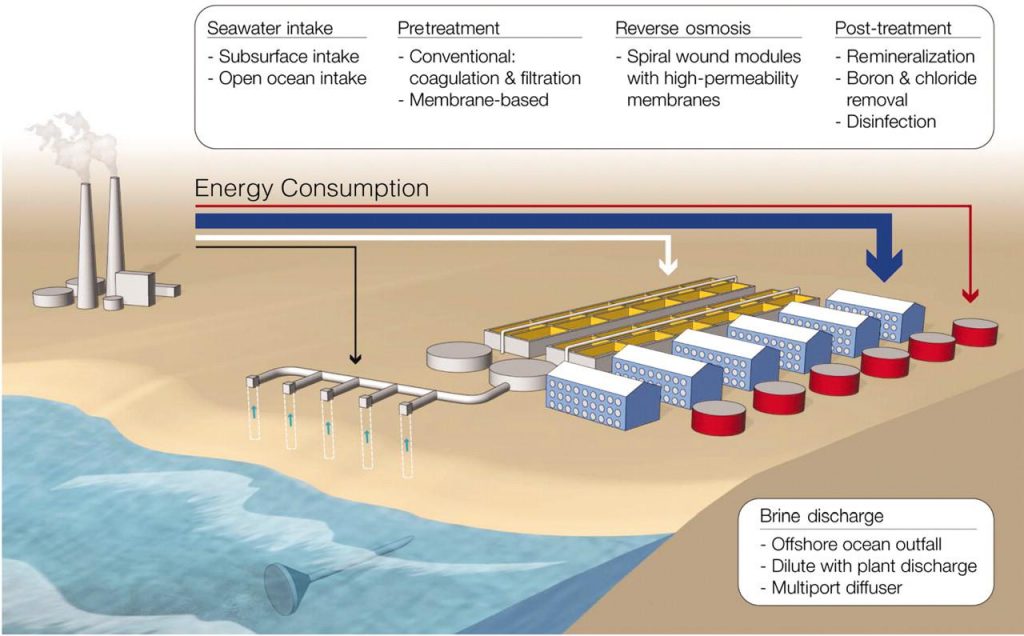 If you keep up with global news with any consistency, you will have heard about water shortages occurring all over the world. There are millions of people left without regular access to clean drinking water. This shortage is due in part to the lack of freshwater on the earth in areas of large population centers. Even though a majority of the earth is covered in water, very little of it is actually usable to humans, animals, and land-based plants. With about seven billion people on the planet, humans utilize a lot of water, for both non potable and potable applications. Seawater desalination (SWRO) can be a solution for communities and companies in need of a continuous water supply to combat the effects of water scarcity.

Groundwater and glacier water are actually the two largest sources, however, they may not be easy to get to or use. We do already use groundwater to an extent, but some of it is so deep it’s too expensive to utilize. No one is particularly keen to start melting glaciers with the looming threat of climate change hanging over their heads.

Well, maybe we don’t need freshwater to start out with….

The oceans and seas cover 71% of the earth’s surface and they hold 96% of the total water on the planet. The old phrase, “Water, water everywhere, but not a drop to drink,” doesn’t have to apply anymore with the utilization of seawater desalination.

What is seawater desalination?

Literally, it’s “desalting” seawater. The average salinity of the world’s oceans is 3.5% or 35 g/L. Reducing the salinity of ocean water to levels acceptable for human consumption is the goal of desalination.

What are the two main methods of desalination?

When water evaporates from the oceans to form clouds, the resulting rain is clean and free of salts. Thermal desalination operates similarly, water is heated until it turns gaseous and then condensed back into liquid that is now free of salts. Of course, these types of systems require high inputs of energy and do not produce particularly high yields due to evaporation losses.

A sea water reverse osmosis desalination system (SWRO) is a bit more complex than drawing water from the ocean and pushing it through a membrane. There are a few extra steps involved.

This is pretty self-explanatory. Seawater is drawn into the system from the ocean. Some draw directly from the ocean or from beach wells, while others may draw from seawater used for cooling in a power plant. Specialized intake systems are designed to minimize the loss of marine life and intake system fouling considerations.

Pretreatment is crucial for the operation and maintenance of the seawater reverse osmosis system process (SWRO). Particulate matter that could foul the membrane needs to be removed. A pretreatment system can utilize a number of technologies to achieve optimal biologic and inorganic foulant reductions.

Conventional systems use multimedia filtration, while others utilize specific filtration media with disinfection or micro- or ultrafiltration processes.

Now we’ve come to the main component of the system. In this step, the salt is separated from water into a super concentrated brine solution. The prior pretreatment process keeps the membranes clean, allowing the water to pass through unhindered.

Often after these processes, not only are the salts removed but so are the components of water that make it good for our bodies as well as taste good. Calcium and magnesium are some such minerals. They also balance out the pH of the solution, which often tends to be acidic post treatment.

Pathogens have the chance to grow in treated water storage tanks, however, disinfection via chlorine, chloramine, ozone or ultraviolet light or a combination of these methods can be used.

After the seawater desalination process (SWRO), a highly concentrated brine solution is left over. This brine needs to be handled and discharged carefully. The high salt content is not good for plant and animal life. The best way is to put it back into the ocean via a specially designed outfall brine discharge system.

Oceans are large and naturally self-regulating. However, some marine life is very sensitive to changes in salinity, therefore, the brine water needs to be dispersed over a large surface area to increase its dilution factor.

Cost/Benefits of SWRO for Drinking Water

Reverse osmosis systems, after years of research and testing and new developments, have been greatly improved. Overall reduction in capital and operating costs continue to be witnessed as new process optimizations are implemented.

RO systems have lower costs than thermal systems because they don’t require thermal (steam) energy use on top of their electrical power consumption. For a detailed breakdown of SWRO plant costs and comparison with thermal systems, have a look at this article from Advisian.

Lower costs isn’t the only benefit of SWRO treatment. As mentioned at the beginning of this article, desalination adds another source for drinking water in places that are facing water scarcity. There is also the fact, that the process intake volume is not hindered in drought conditions. Additionally, RO systems are modular so they can be easily implemented and do not require large areas for operation.

Therefore, SWRO treatment is particularly useful for both potable and non potable applications in arid climates. These seawater desalination systems (SWRO) are also beneficial for coastal and island communities and places with low annual rainfall levels.

Do you want to know more about sea water reverse osmosis desalination (SWRO), and how it can help your organization? Contact the seawater desalination experts at Genesis Water Technologies, Inc. at 1-877-267-3699 or contact us via email at customersupport@genesiswatertech.com to connect with us to discuss your specific application.