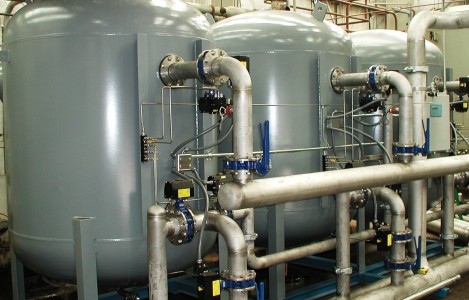 Finding a solution to water treatment issues can be daunting with all of the options out there. Municipalities and commercial businesses can have a variety of problems that need fixing, and each of those problems can have multiple solutions. While we can’t list and discuss solutions for every problem out there that you may have, this article will get into granular media filtration as a method of water treatment for municipalities and commercial businesses.

One of the earliest forms of granular media filtration for water treatment that is still commonly used today, is sand filtration. It certainly isn’t a bad solution, but it does have certain shortcomings in several areas. Over the years, other types of media have been discovered and developed that can either supplement or replace sand as a filtration media to remove contaminants.

As anyone could imagine, metals in drinking water are not very good for your health, and they also aren’t that great for plants as well. Many people are familiar with the dangers of lead in drinking water and it’s a particular problem in places like Flint, Michigan. Lead is particularly dangerous for children as they are more susceptible to absorbing it than adults. Exposure to enough of this contaminant can result in neural diseases and anemia. Other trace metals of concern are arsenic, mercury, cadmium, manganese, and copper, just to name a few.

Ammonia can be produced naturally from biological degradation processes, but it can also find its way into water sources from industrial discharge. This requires municipal or industrial facilities to treat for it. However, it is also used in water treatment to prolong the effectiveness of chlorine disinfection, known as chloramine. To humans, ammonia is more dangerous in its gaseous form, but prolonged exposure in drinking water could cause some side effects. Mostly it is dangerous for aquatic life and vegetation in higher doses. It is rather difficult to remove by most conventional treatment methods.

Hydrocarbons typically come from petroleum mining and refining facilities. Many of these commercial facilities are required to deal with these pollutants, but it isn’t impossible that they would end up in trace amounts at municipal treatment facility as well. There are many different types of hydrocarbons depending on their composition of hydrogen and carbon so they can have varying health effects.

Volatile organic compounds are carbon-containing chemical compounds that can exist as a gas at room temperature. They consist of a broad range of chemicals, but currently, 23 have set regulations for drinking water standards. Several of them are carcinogenic at high enough levels, and others can cause organ and nervous systems complications. These VOC’s can originate from a variety of industrial and commercial sources, and are also present in many products used in and around the average home.

Like ammonia, chlorine is also used in water treatment systems as a disinfectant and is also present in some household cleaners. Chlorine has been shown to present adverse health effects in high enough concentrations, but it also can result is the degradation of piping systems. It is corrosive, especially in the presence of stainless steel. However, most problematic is chlorines potential to form disinfection by-products (DPBs) in the presence of certain organic compounds. These DBPs include trihalomethanes and haloacetic acids. Trihalomethanes have two particular forms, bromoform and dibromochloromethane, that are the main causes of health problems in humans when consumed.

Turning a tap and getting reddish-brown water is indicative of iron in your water. Aside from the displeasing color and taste, iron itself isn’t particularly harmful to humans in low doses. In reality, the danger comes from the presence of iron consuming bacteria. But, higher doses can cause skin issues at least, and hemochromatosis at the worst. This is caused by iron overload and can lead to liver, heart, and pancreatic problems or even diabetes. Additionally, it may also cause stomach issues like nausea or vomiting.

Homeowners typically gain some sort of familiarity with hardness in their water on occasion. It happens when elements like calcium and magnesium are present in high enough concentrations in water, that they begin to precipitate out. This process causes buildup in pipes, sinks, tubs, and appliances/systems that use water. As for the effects on people, the water can taste odd and can form a scum layer on the skin or in hair when showering. Aside from being inconvenient, hardness isn’t bad for human health as calcium and magnesium are necessary minerals for good health.

This issue is less about health effects and more about equipment effects. Sand filters are fairly common methods of filtration. These are relatively cheap and effective, but they can have issues for rapid or slow sand applications. Filters clog. It’s a basic and obvious result based on their method of treatment. When that point is reached, back washing or skimming is necessary for continued use. Sand filters happen to require this rather frequently. Slow sand filters do most of the filtering in the top few inches of the bed so they cannot typically handle high loads for very long. Rapid sand filters use pressure to force a more even vertical distribution of filtration, but sand has a rather non uniform structure between grains which still results in frequent, clogging and back washing. There is also head loss to be considered as well.

For more information on any of these filter medias and their uses and benefits, please see their related articles: anthracite, activated carbon, zeolite.

Anthracite is a very hard form of coal that has been converted into a granular media filtration product. It can be used as a standalone filter media, but it works best in multimedia filters with sand and garnet. It improves upon the issue of clogging sand filters. Anthracite is less dense than sand so is used as a top layer. Its angular and uniform granules allow particles to penetrate further into the filtration bed. A deeper solids penetration will reduce the head loss of the system and reduce the time between backwash cycles. An added bonus, is that backwash cycles are more effective thanks to the agitation caused by the angular granules. On its own, anthracite does not add to the removal of any other constituents besides suspended particulate matter, but its lack of silica does not add to any hardness issues.

There are a few different types of activated carbon, but one of the types rising to the forefront of water treatment is coconut shell activated carbon. It is produced by heating coconut shells absent of oxygen to get a charcoal that is then activated by either a physical or chemical process to burn away carbon and other volatile compounds to reveal a high density of pores. These pores greatly increase the available surface area for adsorption and absorption that is paramount in the removal of compounds other than suspended solids. It can be used by itself as a polishing filter or added to a multimedia filter as a supplement. Activated carbon is able to handle problems involving the removal of hydrocarbons, VOCs, certain other organics, chlorine, and trace lead from water.

The microporous aluminosilicate zeolite has become a prominent replacement for sand filters, though it is slightly more expensive. However, it has nearly three times the loading capacity of sand which aids any issues with excessive back washing and head loss. This granular filtration media product also has the unique ability to act using its ion exchange capacity. This gives it the ability to reduce more charged pollutants such as trace metals, ammonia, and hydrocarbons and also double as a water softener if required.

Is your municipality or commercial facility experiencing any of these issues with or without a water treatment system? Call the water treatment experts at Genesis Water Technologies, Inc. at 1-877-267-3699 or email us at customersupport@genesiswatertech.com for more information or to setup an initial consultation.